P2P lending world has been hit by Envestio, Kuetzal and several other scandals where lenders lost a lot of money. EstateGuru seemed to us a more serious platform. After a deeper investigation, we have some concerns about this platform too for the lenders but also the shareholders who have invested during the equity crowdfunding rounds on Seedrs.

P2P lending platforms allow borrowers to find lenders when banks are reluctant. The rates are often higher than 10% per year. EstateGuru seems less risky than some competitors as each loan has a real estate collateral, a mortgage. If a borrower fails to pay back, the collateral can be seized and sold by a real estate agency or during an auction. In most of cases EstateGuru has managed well. It claims a 0% loss for lenders so far. It just “forgets” 10% of the principal lost during the Tuigo loan. Not bad, even if EstateGuru got its fee anyway during the recovery process of this loan…

The worse is coming?

In fact, some other loans went very bad, especially the ones of Rolegur and Rolegur Residential Estonian companies. Kristaps Mors has already described the case of Zilu iela 10 loan. The valuation of the collateral, a land in Riga (Latvia), was 296 000 € and the loan 180 000 €. As defaulted, the land was sold on auction by the Riga city (probably because the tax have not been paid) at… 71 500 €! When Kristaps Mors checked the history of the land, he discovered that it was previously sold at 23 000 € in 2014 and 18 000 € in 2016.

“Funny” part: the buyer at the 2021 auction was, according to the platform… “EstateGuru's debt collection agency who was acting in the name of EstateGuru's investors. EstateGuru remains in control of all the actions in regards to the property and the security agent’s mortgage will remain. After the results of the auction are approved, the property ownership will be transferred to our debt collection partner who will proceed with the sale of the property without the limitations of the forced sale process. This activity was necessary to avoid the property being sold under poor terms to other interested parties and to continue with the agreed activities to realise the collateral on favourable grounds and terms.” Meaning than no one else wanted the land at 71 500 €. So good luck to sell at higher price!

Similar stories (with less happy ends…) happened to Marsa gatve 7 and Zvaigznaja gatve 18 loans in Riga too. The loan amounts were respectively 205 000 € and 182 000 €, with collateral values of 315 000 € and 280 000 €. These collaterals were sold during auctions in June 2020 at 134 250 € and 114 750 €, respectively to Baltex Nami and to Royal Property Investment. So here too, there are big loss and unfortunately the buyer is not EstateGuru, meaning it’s too late, it will be impossible to try to sell these real estates at higher price. Instead of updating the website to tell about these auctions, EstateGuru has published in December (so six months later): “We have a written confirmation from an independent buyer confirming their interest to purchase the collateral and repay or refinance the loan. The transaction should occur in February 2021.” It sounds deceptive (EstateGuru hasn’t given us any explanation). The problem is that EstateGuru has a second market where it’s possible to sell/buy a loan, EstateGuru getting a 2% fee during the transaction. And, because of the wrong information published by the platform, a lender could buy with a premium (meaning at a higher price than the principal because some future interests are included) these loans hopping to get a normal payment back, while the loans were in fact already big loss.

In February 2021, a new update stated: “Due to the local legal environment, the process is taking longer than anticipated. Difficult for us to propose a specific date or deadline. The transaction should occur within six months”. Again, nothing about the auction and the loss, buyers on second market could still be confident… 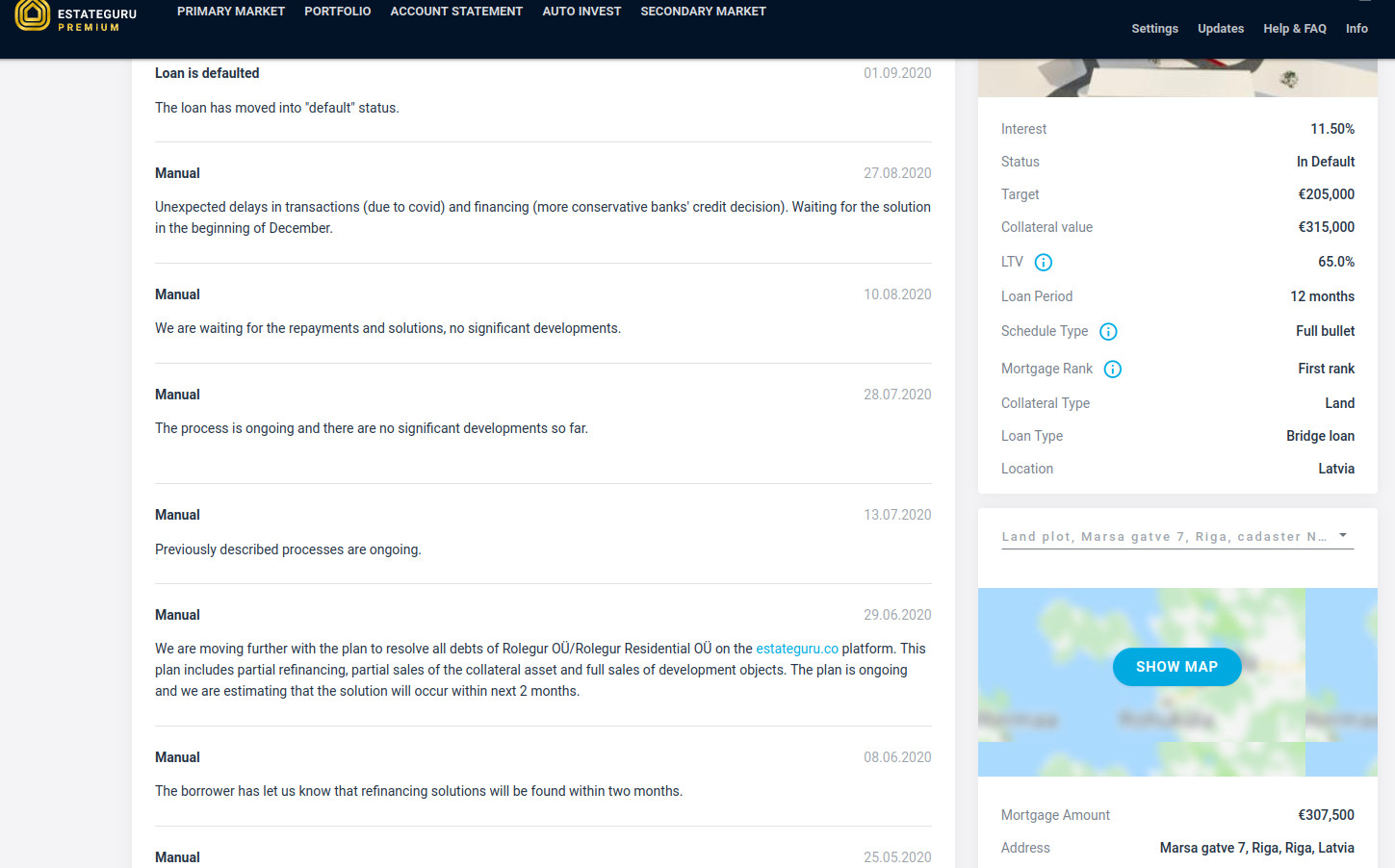 Kaspar Kaljuvee, Chief Risk Officer of EstateGuru, told us: “The differences in auction sales prices and valuation reports in case of auctions exist for all the defaulted projects in every country. With more specific properties like land and in Latvia in general the fluctuations are unfortunately greater.” But no other loans has shown on EstateGuru so big differences between valuation and sold prices. And why EstateGuru is not clear about specificity of lands in Latvia on its website? Anyway we can understand fluctuations, but how is it possible the value of a land goes from 18 000 € to 296 000 € then back to 71 500 € within so short time? Furthermore it seems no work has been performed in the meantime with the money borrowed on EstateGuru. What was this money used for?

Several other Rolegur and Rolegur Residential loans were defaulted, sometimes after almost one year of no payment. Other borrowers are usually less lucky, with faster default. EstateGuru claims it didn’t default faster here as it had a buyer, but unfortunately “the different other creditors who held claims or mortgages on the property, blocked the proposed transactions. After it was clear that no other option for solving the late loans is possible we defaulted the projects and resumed with default process and auctions”, told us the Chief Risk Officer. For several loans, no work was performed and, again, we wonder what the borrowed money was used to.

Kaspar Kaljuvee reassures us that “Mihkel Roosme didn't have any influence in the decisions made for these loans. When the loans against two sold Latvian land plots were issued, Mihkel Roosme wasn't connected to EstateGuru in any way, actually he was official employee of Swedbank Estonia. I'm also stating again that Mihkel Roosme didn't have any influence on the debt collection process and decisions for the recovery process”. Anyway, at least EstateGuru should have updated the loans to tell when a link appeared with Mihkel Roosme so buyers on the second market could decide if they trust EstateGuru independence claims or not.

And, in fact, EstateGuru should have warned investors on the primary market too. The Zilu iela 10 loan was funded on 20 July 2019. But on Facebook on 9 July 2019, EstateGuru post: “EstateGuru Head of Business Development Mihkel Roosme will be participating at the Inmointer16 conference on July 12 in Barcelona. Mihkel will be talking about Crowdfunding 4.0 on stage. Meet us there! More info (Spanish): http://bit.ly/2XLFUj9”. Even if this information was on social networks, it would have been more honest to tell the borrowers on the loan pages directly, because everyone is not following the social networks. 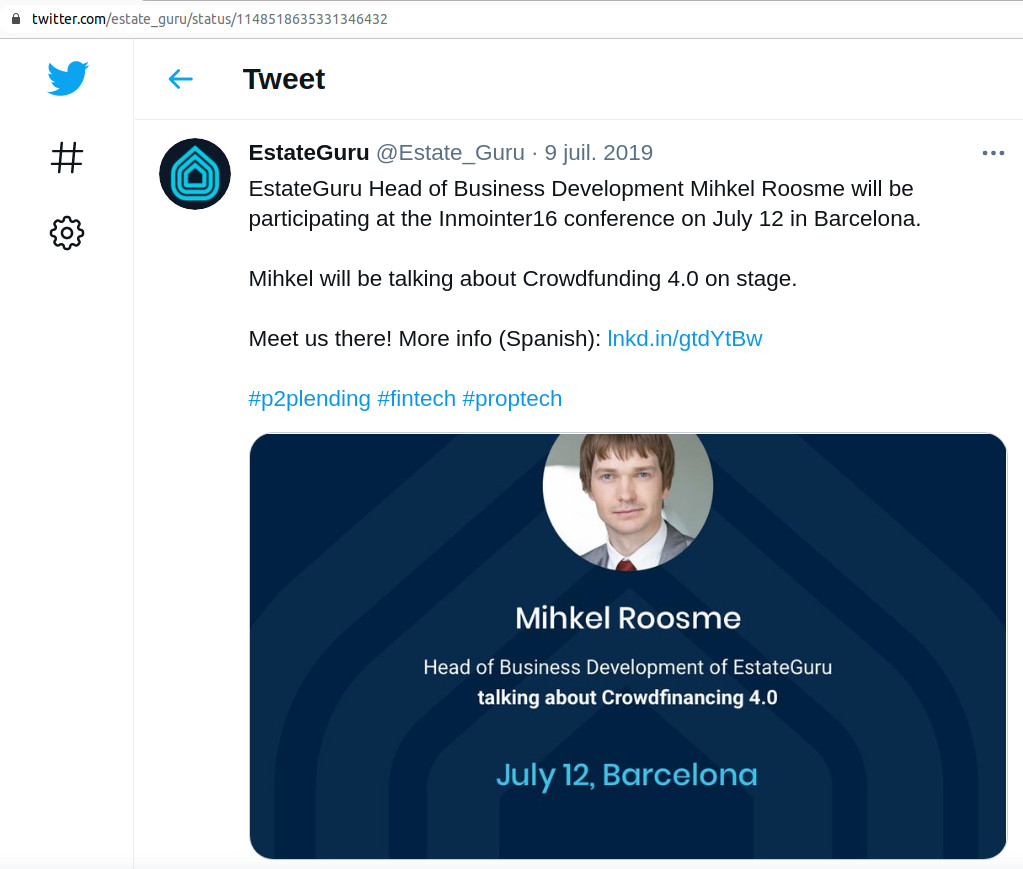 Big valuation problems, lack of transparency, lack of important updates: lenders can’t trust information provided by EstateGuru about the loans and have to check again (regularly!) by themselves. In several countries where EstateGuru plan to expand and where financial information provided to customers has to be accurate, foreign financial watchdogs could decide EstateGuru practices are deceptive (penal). Here is a risk for EstateGuru international expansion. Ironically, Mihkel Roosme is in charge of this international expansion.

Even if so many failures in his professional career, Mihkel Roosme seems important for the EstateGuru development. Why not. But is he more important than the safety of the lenders money who make the platform running?

EstateGuru people told us they “intend to recover in cooperation with the borrower from other collaterals (not related to other EstateGuru loans). EstateGuru will only consider it a capital loss in its statistics and bookkeeping once the money is transferred to EstateGuru's account from the bailiff's and the borrower hasn't paid back the rest of the money within 9 months from that particular date. And even then we will still be working on solutions to pay back the whole of the principal to investors although in the books we will show it as a capital loss”.
How will EstateGuru manage?

More money for EstateGuru than for lenders

Fortunately, EstateGuru could recover some Rolegur and Rolegur Residential default loans. For example, loan #8823 was 101 500 €, its collateral was sold at 116 000 € during auction. But minus 5 000 € enforcement costs (bailiff agent, security agent, bankruptcy manager fees) and minus 5 000 € EstateGuru service fee, remain only 104 500 € for the lenders, received in April 2021. Meaning the lenders got 3 000 € as interests since January 2020, less than 3%. Can we imagine EstateGuru had so many difficulties and fees to get the collateral from a person still working for EstateGuru? By the way, yes, the EstateGuru security agent is another company, but its name is: EstateGuru tagatisagent.

A competitor of EstateGuru victim of Rolegur too

Crowdestate, an EstateGuru competitor, had also trouble with a loan connected to Mihkel Roosme, thru Tamme Arenduse, a daughter company of Rolegur. The words “suspicion of fraud” are even used in Aripaev newspaper as he was not paying back. Later, Crowdestate has complained that “Mihkel Roosme, a representative of Tamme Arenduse Ou (bankrupt), has transferred the Tammelehe Street road property, which could potentially affect the value of the collateral. The transaction was made immediately before the declaration of bankruptcy of Tamme Arenduse Ou. The property was transferred to TOM Holding Ou, which is owned by Kristjan-Thor Vahi. Mihkel Roosme and Kristjan-Thor Vahi are connected, among other things, through the crowdfunding platform EstateGuru, where Kristjan-Thor Vahi is Mihkel Roosme's employer”. Lately Crowdestate informed it could finaly buy back the road to access to the property it can now try to sell to get the lenders money back, after years of waiting.

Lack of updates and potential risk

Shortly after the #6454 stage 2 loan funding, the director of the Projekt Primo borrower company has changed to Alo Lillepea. EstateGuru has not updated the project page, meaning some people would buy this loan on the second market without knowing they’re lending money to someone they don’t feel comfortable with. Because Alo Lillepea has appeared several times in the Estonian press, and not a positive way. He was involved in the Tamme Arenduse case. With his brother Ivo (who was the owner of a real estate used as a collateral by Rolegur), he was also suspected in the Q Vara real estate scandal (the Supreme Court rejected the case because of expiration, but this story could remain a warning for investors). Alo Lillepea was also criticized for the Vaatsa Agro case. Etc. Alo Lillepea has never paid any interest for this #6454 stage 2 loan, he’s more than six months late. EstateGuru has not answered to our concerns on this topic. Last minute update: the loan went default without any alert notification to lenders.
We have concerns with several other loans (from Rolegur or not), we’ll complete this article later.